Posted on September 24, 2015 by Jonathan Milford

350.org are running a council divestment campaign and CASES are into it. Their first target is Sydney City and CASES are targeting the three eastern suburbs councils – Randwick, Waverley and Woollahra – who have a joint Sustainability programme. Have a look at the Council Divestment Argument for Sydney, below.

The Council Divestment Argument for Sydney 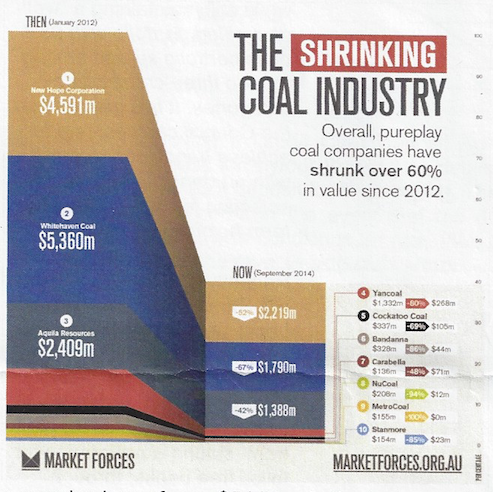 Divestment is the modern world’s way to address climate change. It contrasts with the old world government models mired in corporate influence and conservatism which struggle to find the momentum necessary for this cause. The driver behind divestment is a simple ethical principle: “if it is wrong to wreck the environment – it is wrong to profit from that wreckage”.

Over the last few months a range of world respected authorities have clearly communicated that more urgent action is needed if the world is to have any chance of limiting warming to 2°C. Eighty to ninety percent of unexploited fossil fuel reserves must stay in the ground. Continued exploration for fossil fuels and investment in opening new deposits is unjustified. Divestment’s aim is to create a paradigm shift that erodes the social license of the fossil fuel industry that continues these destructive practices.

While divestment is an ethical one in many instances, it is also been increasingly recognised as a financially sensible move. One of the reasons for this is the increasing potential that fossil fuel companies may be forced to ‘write off’ fossil fuel holdings should they be deemed unburnable and therefore no longer a bankable asset. A recent report found that California pension funds incurred a massive loss of over $5 billion in the last year alone from their holdings in the top 200 fossil fuel companies. Similarly, among Australia’s biggest pure play coal producers, values have shrunk over 60% since 2012 .

Sydney City Council is evidently concerned about minimising the potential for climate change as seen in the great strides the council is making to reduce carbon emissions through the Sustainable Sydney 2030 Plan. The focus on improving energy efficiency and identifying alternative sources of energy is setting much needed Australian benchmarks in emissions reduction and innovation.

However the boldness of Sydney City Council’s commitment to sustainable systems, policies and practices in reducing carbon emissions is not matched in the Council’s financial policies and strategies. We are aware that Australian councils are not permitted direct exposure to the sharemarket and that the bulk of investments are in term deposits with banking institutions. A review of the Council’s investments shows that it is heavily dependent on investments in fossil fuel investing banks – in particular the ‘Big 4’ domestic banks – who are financing billions of dollars worth of coal and gas projects around the country. The latest Sydney City Council investment report as of 30 June, 2015 revealed that 69%, or over $430M, of its term deposits were invested in these banks.

As developing “environmentally and socially responsible investments” (SRIs) is already a built in component of Sydney Council’s Investment Strategy, the first major commitment has been made. However, the councils’ adopted strategy of further developing SRI options solely through “engagement with financial institutions” falls short of what Sydney can do to show that it is the progressive and sustainable-minded council that it touts itself to be. The next obvious step is to make commitment to divest from the very banks that support this environmentally destructive industry. Setting new investment policies to give preference to banks that do not fund the fossil fuel industry can be the most powerful way that Sydney City can engage with financial institutions.
Since Marrickville passed a divestment motion in November 2014, their fossil free index has followed suit, while still maintaining a “well-diversified portfolio with 98% of its portfolio spread among the top three credit rating categories. It is expected that the Council can continue to achieve benchmark returns with prudent investment selection for its short and long term holdings.” 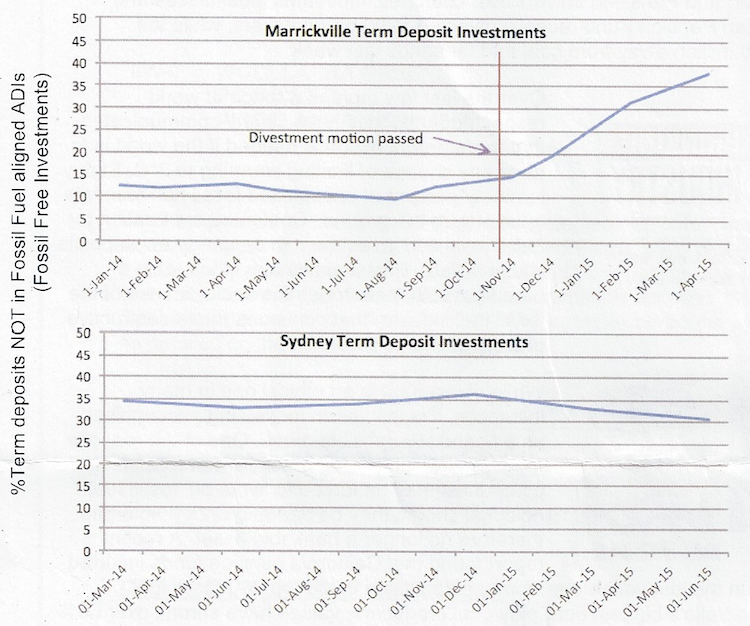 Recently 350 Sydney released a 3-Step Divestment Guide for Local Government. We have enclosed a copy for your consideration. It is not a one size fits all approach, the possible approaches range from: stating a preference for fossil free banks; through setting targets for a percentage of funds in fossil free banks; to a full divestment going forward of all Council funds. The guide envisages a practical 3-year timeline to fully divest. It includes a sample divestment motion that has successfully passed in other councils.

350.org urges you to consider supporting a motion to divest part or all of the City of Sydney’s funds from fossil fuel investing banks. Divestment would be a natural counterpart to Sydney’s already substantial commitment to reducing its carbon footprint. It would solidify the City of Sydney’s reputation of being one of the world’s most progressive councils.

We are seeking residents in the three council areas to join us in talking to councillors. If you are interested contact for:
Randwick, Jonathan Milford at milford@bigpond.net.au,
Waverley, Nicolas Miliaret at n.miliaret@gmail.com or
Woollahra, Ian Rose at ianrose3@gmail.com.
Divestment is snowballing and we expect that the major banks, starting with the Commonwealth, will be obliged to go fossil free with their investments of our money. 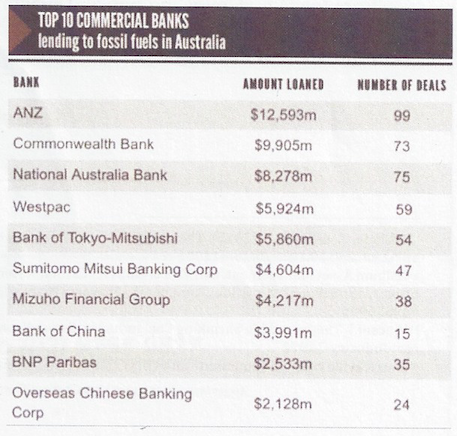 This entry was posted in Divestment, Uncategorized. Bookmark the permalink.